Before globalization touched our lives, people hardly ever experienced long-distance relationships, unless they had loved ones who were shipped off to war. But in the present times, lifestyles have changed completely. Now, people don’t just have loved ones living in all parts of the world; they also have business opportunities in every overseas corner of the world.

However, to maintain these relationships, you need a strong connection. While traditional phone systems allow for seamless international calling, it’s also extremely costly. That’s why individuals and businesses are increasingly opting for the technology of VoIP (Voice over Internet Protocol); so much so that experts have predicted that soon the VoIP industry will be worth $137 billion!

But what is VoIP and how is it connecting the world with its communications solutions?

VoIP is the new age communications technology that uses your internet connection instead of underground cables to transfer your voice messages across platforms. Unlike traditional telephony that connects calls over the PSTN (Public Switched Telephone Network) also known as Plain Old Telephone System (POTS), VoIP service makes use of SIP Trunking that involves breaking down of voice messages into tiny data packets.

The data packets carry your voice and video messages over the World Wide Web to your intended recipient where, with the help of codecs, the tiny packets are reassembled into coherent messages. All of this is done in real-time, so there’s hardly ever any latency or delay in the message delivered; given your internet connection is strong.

There’s no doubt that traditional phone systems have better reception and service quality than VoIP service. That’s primarily because the system exists in the physical world rather than on a virtual cloud. That being said, there are less than 0.5% complaints registered against VoIP that doesn’t pertain to having a weak internet connection.

However, it’s not just the call quality that factors in deciding if VoIP is a better communication solution; it’s the total cost of the network that makes VoIP popular with individuals and businesses. In fact, for businesses, the cost of installing and implementing a VoIP service into their communications network can be divided into two parts:

This includes the initial installation expenses, such as purchasing new hardware or paying down payment for your subscription plan.

As the name suggests, these expenses vary from time to time, depending on the number of calls being made, so considering you go from making 1000 calls in a month to making 2000 calls your variable costs will go up as well.

While local calls cost more or less the same on both, traditional phone systems and VoIP, it’s international calling that gives VoIP an edge over your existing phone system.

Cheap international calling isn’t just a marketing stunt; rather VoIP service providers really can allow for free international calls on their data plans. This is due to the fact that unlike in traditional phone systems, both local and international calls are treated the same way. You can think of it as sending an email. Whether you send an email to a person sitting next to you, or someone who lives across the globe, the process of sending and receiving that email will remain the same in both scenarios.

As a result, international calls can be priced just as low as local calls. In fact, many VoIP service providers even allow companies that have people working around the world to communicate free of cost with anyone who’s part of their network, irrespective of where they are.

Moreover, this doesn’t just help businesses cut down on their communication costs, it’s also ideal for families that have loved ones living abroad as the significant reduction in calling expenses doesn’t just help them save money, but it also allows them the freedom to call their family members with abandon because they no longer have to worry about racking up their phone bills. 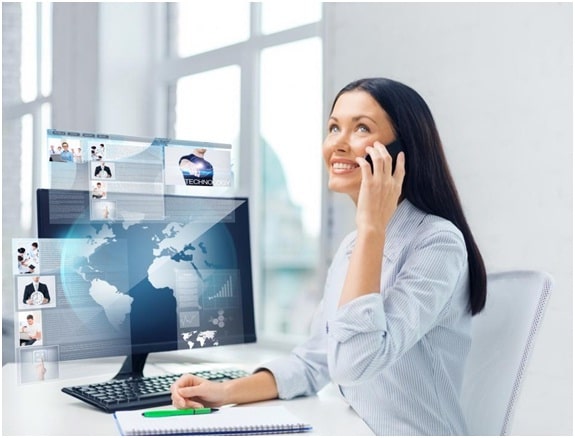 How Does International Calling Work on VoIP?

As mentioned above, making an international call is similar to sending an email. However, there’s a certain protocol that you have to follow to make the call successfully. Again, this is not very different from dialing an international number with a landline phone set. With a landline phone set, you’re required to dial the international prefix, such as the exit code (to identify that you’re making a call outside of your host country) followed by the country code of the country you’re trying to call. This is then followed by the area code, and then finally you dial the actual number of the intended recipient.

While some of these international calls can make it through the entire process over the internet, most of the times they have to be dropped to a PSTN exchange, right before they’re received on the other end. As a result, the call operator charges a small fee because your call makes a connection with the landline network in order to be received. This is why, even though local and international calls are essentially sent and received the same way, international calls are slightly costlier than local calls.

However, since they only make use of the landline network for traveling the last mile, they’re still significantly cheaper than international calls made via traditional phone systems.

In the best-case scenario, you get international calling with video conferencing, which allows businesses as well as households to interact with people around the world as if they were sitting in the same room!

This proves incredibly beneficial for businesses that have remote workers in different countries as it helps the team communicate and collaborate hassle-free and it’s a great boon for families as well who miss the faces of their parted loved ones!

The author of this blog is a VoIP expert at Top5 Business VoIP. Top5 Business VoIP is an online register that features information on the top VoIP service providers, in the form of reviews, comparisons, testimonials, and guides. The website allows users to assess their VoIP options to choose the best for their businesses.