When it comes to Android development, Kotlin is already the standard. This fact and good compatibility make Kotlin increasingly popular on other platforms. Kotlin is leaving the Android room and is slowly establishing itself in iOS and Windows. But is Kotlin better than Java? It is time to take a closer look at the two languages ​​and see where the differences lie.

Key Facts at A Glance

What Exactly is Kotlin?

Kotlin is developed by the company Jet Brains, from which the intelligent Java IDE IntelliJ IDEA and the JavaScript IDE Web storm originate. This makes Kotlin a statically typed, cross-platform programming language that can be converted into machine code, JavaScript and Java. It is therefore very versatile and can easily be integrated into many projects. The integration takes place without any compatibility problems and also does not require any interface programming.

A big advantage is that the code is compatible with Java. As an example: A code that is created with Kotlin can be addressed from Java classes. The other way round, Java classes can also be used in Kotlin. Many existing Java projects can be gradually rewritten in Kotlin without losses. This means that you can add current, secure code to existing projects without having to change the rest.

Another advantage of Kotlin is that a lot of boilerplate code is avoided. Often it is part of the good programming style, but it inflates the code unnecessarily. With Kotlin, simple tasks that require almost 100 lines of code in Java can be reduced to less than ten percent. Neither legibility nor functionality is impaired. While this is an extreme example, the Java code can usually be shortened by 20 to 30 percent.

Good to Know: Less code means fewer and fewer bugs, less bug fixing and faster completion of projects. This not only saves nerves, but also time and money.

To avoid program crashes, it is necessary to check in Java whether the value is zero before accessing each variable. This looks like this: 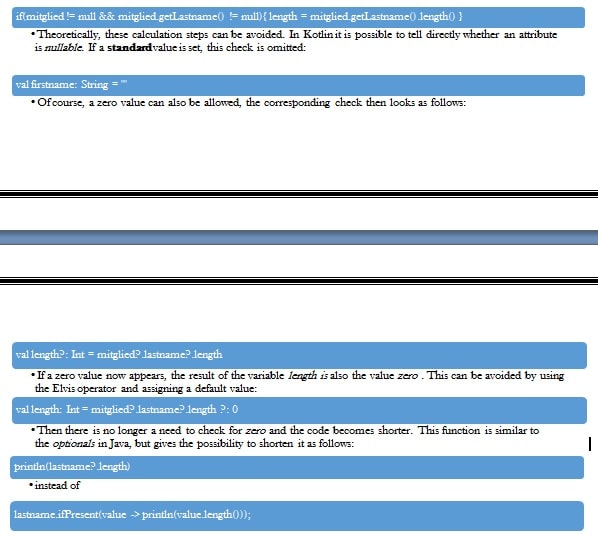 In many cases, Kotlin ranks Java as the standard programming language for Android. Kotlin is therefore integrated into the Android Studio development platform, so that you can create and test apps directly there.

Since version 5, the Spring framework supports Kotlin without additional plugins. In addition, Kotlin is already supported in the development platforms IntelliJ (Community and Enterprise) and Eclipse. This way, Java and Kotlin can be easily connected.

Use as A Native Programming Language Is Increasingly Used

Kotlin is not only at home in Android programming. In the meantime, the tool is also available as a native programming language for some widely used systems. Currently Kotlin/Native can be used on these operating systems:

In Which Cases Is Java Better Than Kotlin?

Despite the good support and push from Google, there are still cases in which Java is a better service as a programming language. We have summarized the advantages of Java in this overview.

Is Kotlin Really the Better Java?

When considering all the facts, this could be assumed. Java has long been the top dog when it comes to apps. Java programs run on all platforms that have a run time environment. This fact made Java what it is today – one of the most popular programming languages. However, it is also a fact that Java often looks confusing due to its many lines of code in smaller apps and is therefore avoided by many programmers.

The recurring security problems are slowly causing a decline. Even Oracle now recommends uninstalling Java if it is not absolutely necessary. Hearing something like this from home can scare off potential programmers. Kotlin will therefore sooner or later replace Java, at least for smaller projects. For larger projects, however, Java is still the better choice.

We hope that this blogpost provides you some meaningful insights. If this has opened any new door in your understanding to Kotlin and Java, we would be more than happy. Check out our more interesting posts.

Code Creators Inc is well-reputed IT across the globe for serving its clients with high-performing and affordable business solutions. Our creative record with successful software& mobile app development projects qualify us as the right fit for you.