Did you witness how artificial intelligence has the most significant influence in changing the life we are living today? And how its sub-branch artificial neural networks can make intelligent decisions like human brains and how neural networks work along with its types.

Read this blog without skimming. When you reach the end, you already have the whole idea about neural networks and four life-changing applications as of today’s date. Let’s dive in for details.

What are Artificial Neural Networks? 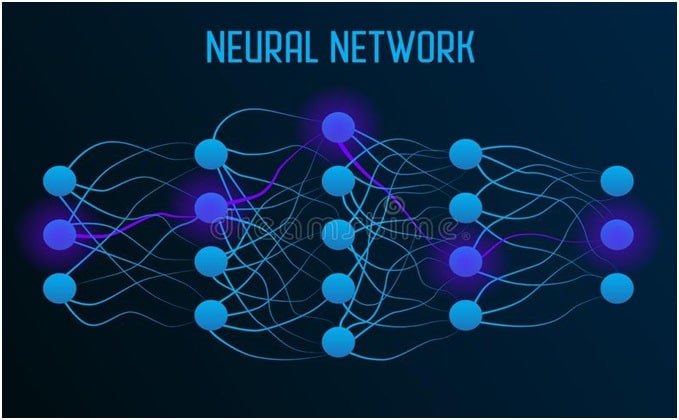 Artificial Neural Networks are called ANN, a collection of nodes interconnected with each other called artificial neurons. This technology is an inspiration from the biological neural networks that constitute human brains. Here the signal gets transferred from one neuron to another. When one neuron receives a signal, it processes the signals to the connected neurons.

How Do Artificial Neural Networks Work? 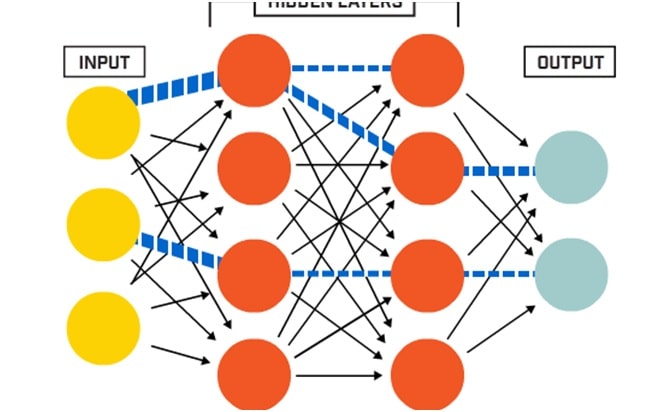 The core component of artificial neural networks is neurons, and how this works is pretty simple. Each neuron receives a signal from connected neurons, multiplied by assigned weights, adds the value, and transfers to the next neuron. At the same time, a few carry an activation function to the output without getting passed through interconnected neurons that will make you feel more like a trivial mathematical equation. But when you add a group of neurons together, that becomes an artificial neural network. 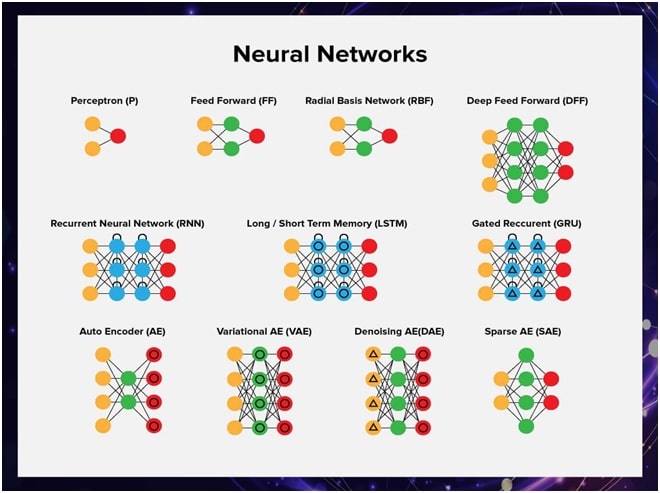 There are seven neural networks in machine learning based on their mathematical parameters and operation and their applications. They are:

Here many independent neural networks contribute to the output collectively. Each of these neural networks performs many subtasks without any signal exchange. Therefore, the complexity and time taken to solve the problem become more accessible, or one of the fastest-growing neural networks in artificial intelligence.

Here the information travels from one neuron to another, followed by paths to become the purest form of artificial neural networks. This type of neural network are hidden networks, where the data inputs through input nodes and the output are through output nodes. It has the best applications in classification techniques with forwarding propagation.

The RBF neural network uses two layers to function; it defines the distance between two points from the point of center. The first layer is the inner layer united with the RBF function; the other layer is called the outer layer, which computes the same output in the subsequent iterations. The best application for this model is the power restoring the system.

In the KSO neural network, the inputs are the vectors to the discrete map from the arbitrary dimensions. Training data is created through training the map, where the weight of neurons may change depending upon the value and dimensions of the map. The neuron’s location doesn’t change while training the dataset, but the input vector and small weight get assigned to each vector in the first phase of the self-organizing process, and the winning neuron is the closest to the point. And other neurons will start moving towards the end in the second phase.

In this process, each neuron acts as a memory unit that retains some information as it goes to the next step. As the name suggests, the work is to feedback the layer’s output back to the input again. The principle is to predict the outcome of the layers. The data to be used later is to be remembered and work for the next step in the process, where the efficiency improves through error correction.

Convolutional neural networks have the best application in text, image, and signal processing in the computer vision field. Here the learn-able bias and weights are allotted to the neurons initially. Then, it remembers photos taking the input features batch-wise and detects the edges finding the pixel values. This process has higher accuracy for image processing and dominates the computer vision techniques.

The prime function of this neural network is to remember things for a long time in the memory cell, along with the previous memories, unless they ask to forget the old memories. Then, theSo let’sFor example, when new data get added through ‘input gate’ and to see the next hidden state from the cell among the vectors is by ‘output gate’ while the old data get omitted though ‘forget gate.’

The benefits in the areas of artificial neural networks are immense. They simplify all the complicated tasks and have the self-learning abilities to deliver meaningful data while extracting patterns and detecting complex trends for computers and humans to understand. The significant benefits are in the areas; neural networks can produce organic learning, nonlinear data processing, fault tolerance, and self-repairing techniques. 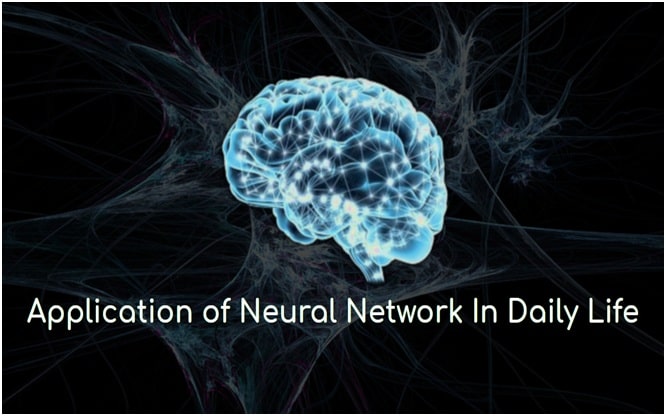 Over the years, our lifestyle is changing continuously; technologies are making our life easy to live and push us towards the fast-forward generation to witness intelligent technologies. If I’m not wrong, here are four life-changing applications of artificial neural networks that will surprise you for the latest transformation. 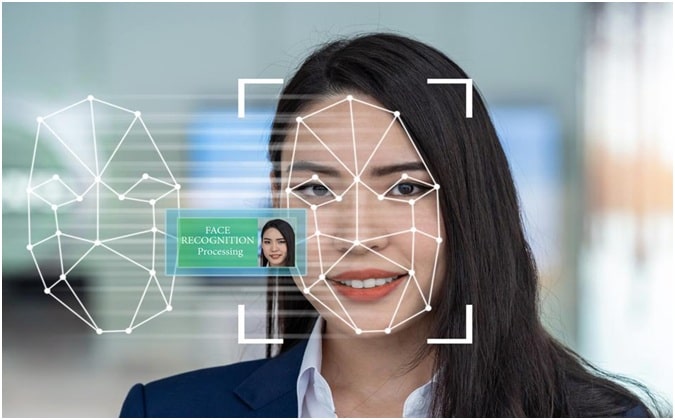 Face recognition entails comparing an image of the face with the saved face database to identify the person in the input picture, the most common features that you see on your mobile devices, popularly called face unlocking. But the technology is not limited to this. Even Facebook uses the same. When you upload a photo, it suggests you tag finding your familiar friend or common location you share.

It divides the photo into two parts, one containing the target faces, while the other focuses on the background. 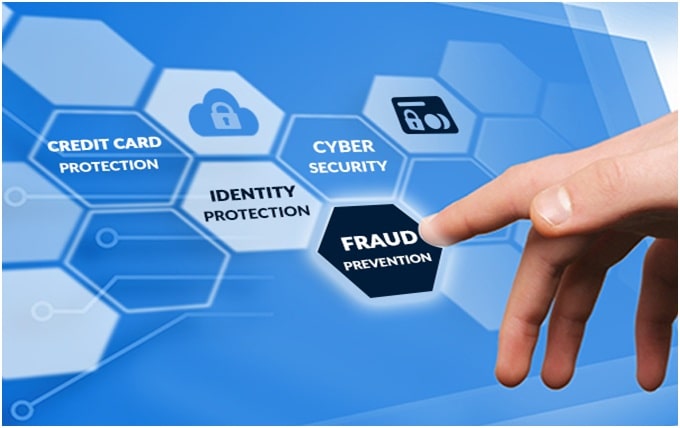 Fraud has been the tremendous headache of the 21st century. Whether it’s about personal data leaks, or money laundering, or anything, buyers always have to take care of sharing credit or debit card security numbers and confidential information. When banks never ask to share this information online, there are fake people in bank representatives’ names. But neural networks play a crucial role in fraud prevention with warnings to proceed further. 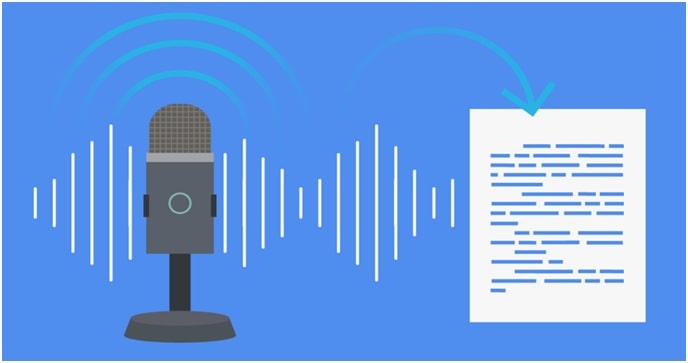 One of the best features on smart devices is nothing but voice-to-text-conversation that has been the most significant trend these days, tuning life filled with intelligent technologies. Whether you hold an iPhone, Android phone, or Alexa built-in devices, the algorithms these devices work are on artificial neural networks in recurrent connection to power voice search with speech recognition system.

Search and Recommendation On Online Shopping 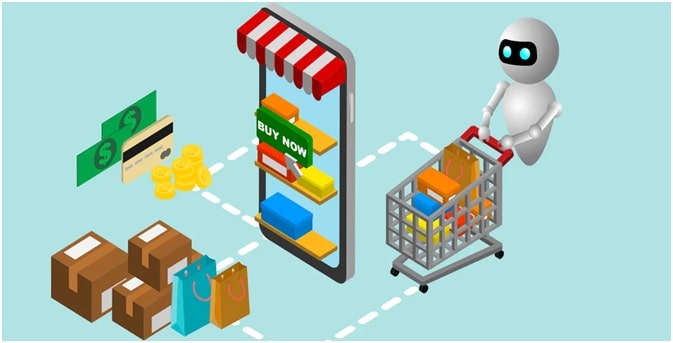 We live in the 21st century, where online shopping is available at huge discounts and delivered directly to our homes. But when you select a product, you also get recommendations along with the product based on similar choices, or you may feel interested in buying. Have you ever imagined how all these happen in the backend – thanks to artificial neural networks and thanks to intelligent recommendations for comfort full of life.

Did you find this blog about learning about artificial neural networks in-depth? That focuses on its categories and four life-changing applications that you use in your day-to-day life without knowing what happens in the backend. What was your experience learning about face recognition, voice-to-text facilities, search, and intelligent recommendations on online shopping? Which of these applications do you like the most? Let’s know in the comments section.